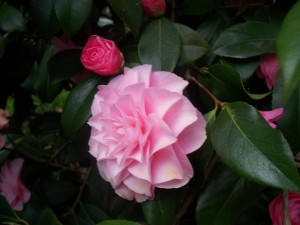 The Gardens care for three National Plant Collections, under the direction of the National Council for the Conservation of Plants and Gardens. This organisation co-ordinates over 600 National Collections across the British Isles. These are sanctuaries, where old, rare and endangered garden plants, as well as new varieties, are grown together and safely conserved for the benefit of horticulture, science and education.

The Gardens are home to three national collections:

Over 100 different kinds of magnolias are grown throughout the Gardens, including almost 30 wild species and natually occuring forms.

Magnolias are grown in gardens for their sumptuous flowers, produced, according to species, from early spring to late summer. These are mostly white or pink in colour, but there are also yellow, red and purple flowered kinds. Flowers which are mostly fragrant can be damaged by late spring frost, as can their developing buds.  Magnolias come in many different forms including deciduous, semi-evergreen and evergreen and either small or spreading shrubs or even trees that can grow up to 20m tall providing a dazzling spectacle when covered in blossom.

Some notable Magnolias growing in the wilderness at Wentworth are M. cambellii, M. wilsonii, M. sargentiana robusta and M. sinensis.

Many camellias are grown in the area of the garden known as the Wilderness.  Camellias are native to India, China and Japan, with rich, glossy green leaves and whose showy flowers appear between late autumn and early summer.

The williamsii hybrid Camellias were originally bred by J C Williams at Caerhays Castle in Cornwall. By crossing C. saluenensis x C. japonica J C Williams created Camellias that were hardier, freer flowering and whose spent flowers drop off naturally. The williamsii hybrids make tall dense shrubs, combining hardiness with the ability to flower reliably in the low light levels of northern Britain, making them the best camellias for general planting. There are single, semi-double and fuller flowered forms; flower colour is mainly shades of pink, with a few red, white and creamy yellow varieties. Blooms are borne from November to May, according to variety.

The National Collection of Species Rhododendrons contains over 300 different wild rhododendrons and naturally occuring forms. Only the hardier species are grown at Wentworth Castle and the range of colour, shape and size of both flowers and leaves, is immense.  In gardens they are mainly grown for their spectacular flowers, produced, according to species, from January to July. Many kinds also have highly decorative leaves.

The rhododendrons that make up the Species collection at Wentworth Castle were mainly introduced from Asia from the mid 19th century onwards. Professional plant collectors, working for nurseries, botanic institutions or wealthy landowners went on expeditions to bring back pressed flowers and leaves as well as plants and seeds for sowing.

Robert Fortune collected plants from China and two of his introductions are R. ovatum (1844) and R. fortunei (1855) which later became a parent of the Loderi Group of hybrids.

Ernest Wilson collected plants from China and Taiwan, some of the Rhodendrondrons that are represented here include; R. wilsoniae (1900), R. auriculatum (1901), R. wasonii (1904) and R. morii (1918) amongst others.

Reginald Farrer collected plants from China and Burma and two rhododendrons represented in the collection are R. mallotum (1919) and R. sperabile (1919).

These rhododendrons have been bred to combine vigour with large flowers and they are mostly hardy to -29 C. They can usually be grown in exposed sites; although when given partial shade from the sun the flowers will last a little longer.

Hardy Hybrid Rhododendrons have handsome foliage and some appear to have felted leaves, this is because they have hairs on their undersides, this is known as undumentum.

Hardy Hybrids in common with most other Rhododendrons are shallow rooting and benefit from a mulch of leafmould to keep their roots moist in dry spells.