Private Functions at the Conservatory

The Victorian Conservatory is sometimes closed for weddings and other private functions, all other parts of the Gardens are open as usual - for forthcoming dates please check our wedding pages.

The Walled Garden is our next major project

LATEST NEWS:  We are delighted to announce a grant of £10,000 has been awarded towards the costs of restoring our historic Walled Kitchen Garden by the The Pilgrim Trust.  Look out for more updates to follow.

The Georgian Walled Kitchen Garden is in urgent need of restoration.

The Garden extends to around 6 acres, and represents a rare surviving example from the early 18th century.  The long history of the Garden includes providing fruit and vegetables for the Wentworth family in the 18th and 19th century, for soldiers in the Second World War, and for  local schools.  This heritage has been unusually well documented in the archives, and these records are available to inform restoration proposals.

The Garden is currently in a very poor state of repair and the walls have collapsed in several places.  Now that the restoration of the Conservatory is complete, the Trust intends that the Walled Garden will be its next major restoration project.  The Walled Garden is already the main focus of our fundraising volunteers.

You can donate, using the donate button at the top of the webpage. 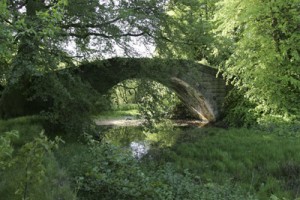 This artificial lake was designed to give the impression of being a meandering river. Glimpses and open views were offered in sequence, with clumps of oak trees hiding and revealing the ‘river’, in turn.

The Serpentine no-longer holds water, apart from after persistant heavy rain as the dam wall on the down-hill side leaks severely.

Restoration of the Serpentine will be a major engineering project and will include repair of the embankment and stone wall along the eastern side to ensure that water can be viewed from the house and gardens and the restoration of monuments such as the Umbrello and Tuscan Fishing Temple.

The Serpentine is also an important wildlife haven and any future works will be sensitive to the needs of wildlife, heritage and visitors to the Parkland.